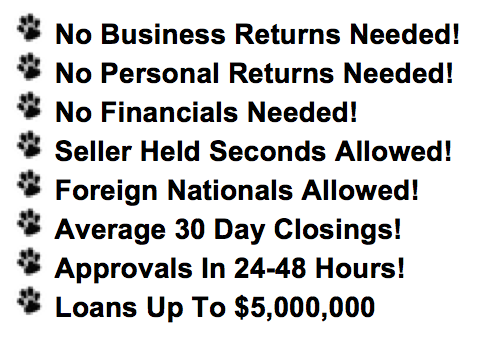 So what is the big deal about stated income loans?

Underwriting commercial loans has become SIGNIFICANTLY more difficult than in years gone by.  Underwriting commercial loans has become SIGNIFICANTLY slower than in years gone by.  Period. Government regulation has a lot to do with it.  It’s torture! It is true that on some of your smaller loans your local bank can put things through faster, if they will do your deal.  The fact remains though that they are all under a higher level of scrutiny.

Stated income commercial loans, also known as no doc commercial loans, are the perfect alternative to hard money or private loans.  If you have good or great credit, there probably is no reason to use a hard money or private money loan unless it is an ineligible property or you live in a rural area where the property is ineligible.  In most cases, it will be less points, lower rate and QUICKER than a hard or private money loan.  Yes, you heard that right.  Lately hard money loans are a lot more difficult to do.  Many lenders underwrite them like a conventional or institutional loan.  They’re going to want financials if they are available and in most cases, they’re not going to lend as much as with stated income.

Let’s not confuse these with the stated income residential loans of years ago, also known as “liar loans.”  Why were they referred to as liar loans? Because you also could buy, refinance or do a cash-out on a residential property years ago by having good credit.  The problem with that is, people who absolutely could not afford a home they were looking to buy were stating in their application that they earned more than they really did. Much more. If you state on an application that you’re an employee at a fast foot restaurant and you earn $200,000 a year so you can purchase a $500,000 home, well, you get the picture.  There were a lot of defaults on those loans because they were in fact, fraudulent.  With stated income commercial real estate loans, it’s all about the asset. Whether it’s an income producing property like an apartment building, office building, self-storage facility, or a retail facility such as a grocery story, auto repair facility or the like, it’s all about the income or sales it generates and much less on your personal income.

This is where stated income loans come in. The whole purpose in reality is to underwrite and verify using readily available industry statistics information in geographical areas about commercial and investment properties without all the red tape and rewarding people with good credit. Sparsely populated areas are generally avoided because of the lack of information available on comparable properties.

You shouldn’t be punished for financing if you have good credit!  Browse around the website and find the different stated income commercial loan financing programs and conveniently download the applications for financing. 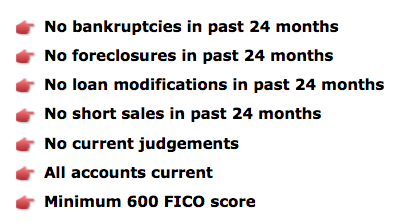